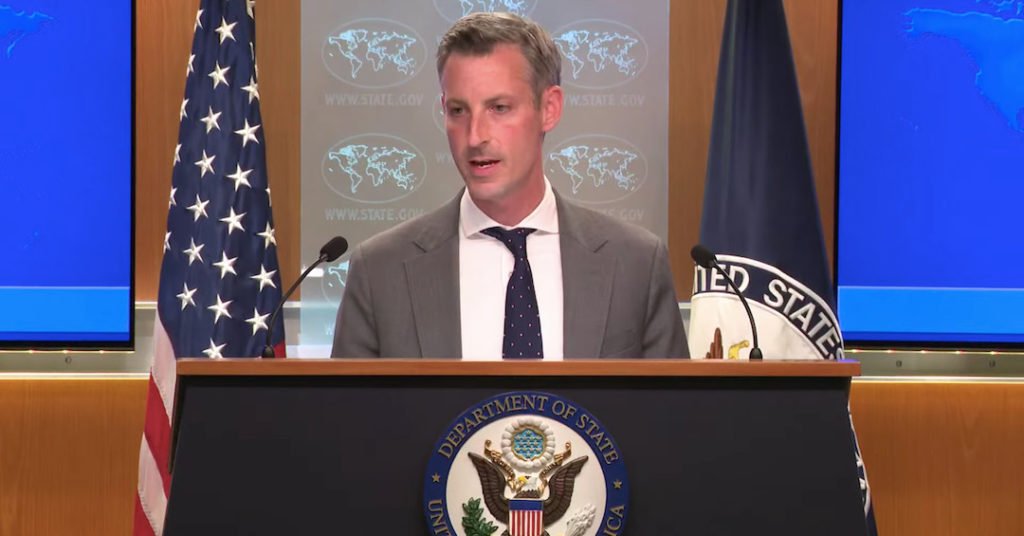 Russian Foreign Minister Sergei Lavrov said on Tuesday that Moscow was open to talks with the the US or with Turkey on ending the war in Ukraine, claiming that US officials are lying when they say Russia has been refusing peace talks.

Lavrov said officials, including White House national security spokesman John Kirby, had said the United States was open to talks but that Russia had refused.

“This is a lie,” Lavrov said. “We have not received any serious offers to make contact.”

Lavrov’s claim was given more weight when US State Department spokesman Ned Price dismissed the offer for peace talks shortly after it was extended, citing Russia’s recent missile strikes on Kyiv.

“We see this as posturing,” Price said at a Tuesday press briefing. “We do not see this as a constructive, legitimate offer to engage in the dialogue and diplomacy that is absolutely necessary to see an end to this brutal war of aggression against the people and the state, the Government of Ukraine.”

Lavrov Says Russia Open to Talks With the West, US Dismisses His Comments
Putin may discuss talks with the West in a meeting with Erdogan this week
by Dave DeCamp@DecampDave #Russia #Lavrov #Ukraine #diplomacy #G20 https://t.co/bRbdPj7muH pic.twitter.com/PESo4C2ioN

This is inexcusable. At a time when our world is at its most perilous moment since the Cuban Missile Crisis according to many experts as well as the president of the United States, the US government has no business making the decision not to sit down with Russian officials and work toward de-escalation and peace. They have no business making that call on behalf of every terrestrial organism on this planet whose life is being risked in these games of nuclear brinkmanship. The fact that this war has escalated with missile strikes on the Ukrainian capital makes peace talks more necessary, not less.

This rejection is made all the more outrageous by new information from The Washington Post that the US government does not believe Ukraine can win this war and refuses to encourage it to negotiate with Moscow.

“Privately, U.S. officials say neither Russia nor Ukraine is capable of winning the war outright, but they have ruled out the idea of pushing or even nudging Ukraine to the negotiating table,” WaPo reports. “They say they do not know what the end of the war looks like, or how it might end or when, insisting that is up to Kyiv.”

These two points taken together lend even more credibility an argument I’ve been making from the very beginning of this war: that the US does not want peace in Ukraine, but rather seeks to create a costly military quagmire for Moscow just as US officials have confessed to trying to do in Afghanistan and in Syria. Which would explain why US Secretary of Defense Lloyd Austin said the US goal in Ukraine is actually to “weaken” Russia, and also why the empire appears to have actively torpedoed a peace deal between Ukraine and Russia in the early days of the conflict.

This proxy war has no exit strategy. And that is entirely by design.

Many have been calling for the US to abandon its policy of actively sustaining this war while avoiding peace talks.

“President Biden’s language, we’re about at the top of the language scale, if you will,” former Joint Chiefs of Staff chairman Mike Mullen told ABC’s This Week on Sunday regarding the president’s recent remark that this conflict could lead to “Armageddon”.

“I think we need to back off that a little bit and do everything we possibly can to try to get to the table to resolve this thing,” Mullen said, adding, “As is typical in any war, it has got to end and usually there are negotiations associated with that. The sooner the better as far as I’m concerned.”

“One thing the United States can do is… drop the position, the official position, that the war must go on to weaken Russia severely, meaning no negotiations,” Noam Chomsky argued in a recent appearance on Democracy Now. “Would that open the way to negotiations, diplomacy? Can’t be sure. There’s only one way to find out. That’s to try. If you don’t try, of course it won’t happen.”

“It is time for the United States to supplement its military support for Ukraine with a diplomatic track to manage this crisis before it spirals out of control,” said the Quincy Institute’s George Beebe following the Monday missile strikes on Kyiv, calling it “a major escalation in the war” that was bound to “bring the world closer to a direct military collision between Russia and the United States.”

“The Americans have to come to an agreement with the Russians. And then the war will be over,” Hungarian Prime Minister Viktor Orban said at an event on Tuesday, adding that “anyone who thinks that this war will be concluded through Russian-Ukrainian negotiations is not living in this world.”

US & allies “should be finding ways to open up communications with Russian President Vladimir Putin to try to end the fighting.” @RStatecraft seems the only place it’s now uncontroversial to make this basic commonsense point.https://t.co/QrGNoIx5Qg

It’s absolutely insane that the world’s two nuclear superpowers are accelerating toward direct military confrontation and they aren’t even talking to each other, and it’s even crazier that anyone who says they should be gets called a Kremlin agent and a Chamberlain-like appeaser. Responsible Statecraft’s Harry Kazianis discusses this freakish dynamic in a recent article titled “Talking is not appeasement — it’s avoiding a nuclear armageddon“:

I have fought more than thirty combat simulations in wargames under my own direction for a private defense contract over the last several months, looking at various aspects of the Russia-Ukraine war, and one thing is clear: the chances of a nuclear war increase significantly every day that passes.

In every scenario I tested, the Biden Administration slowly gives Ukraine ever more advanced weapons like ATACMS, F-16s, and other platforms that Russia has consistently warned pose a direct military threat. While each scenario has postulated a different point at which Moscow decides to use a tactical nuclear weapon in order to counter conventional platforms it can’t easily defeat, the chances that Russia uses nukes grow as new and more powerful military capabilities are introduced into the battlefield by the West.

In fact, in 28 of the thirty scenarios I have run since the war began, some sort of nuclear exchange occurs.

The good news is there is a way out of this crisis — however imperfect it may be. In the two scenarios where nuclear war was averted, direct negotiations led to a ceasefire.

I repeat again that it is absolutely pants-on-head gibbering insanity that these direct negotiations are not already presently underway. Let us petition any and all higher powers we have faith in that this changes very soon. Let us also petition the leaders of our individual nations around the world to exert whatever kind of pressure they can muster upon Washington for these talks to commence. This brinkmanship threatens us all, and the managers of the US empire have no business playing these games with our lives.

The Lies of Empire: Don’t Believe a Word They Say

The Trumanite Counterrevolution and its Consequences

Vehicles of Propaganda: the US Defense Industry’s Recent Cheerleaders

Can the Big Lie Save the Sinking Western Kakistocracy?

In Defense of Communist History and Tradition in America