What Happened to the Nord Stream Pipeline? 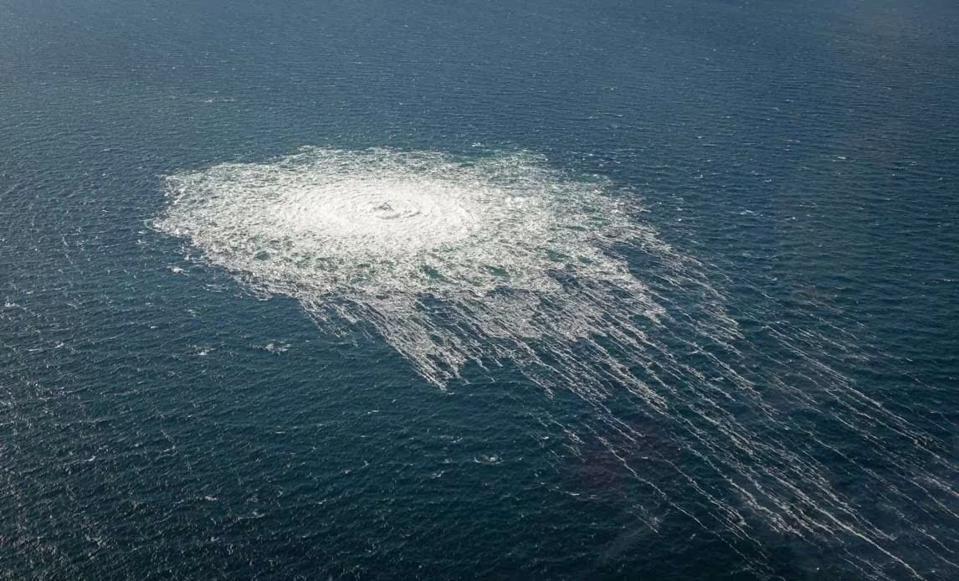 After Danish authorities detected a significant drop in pressure in the Nord Stream 2 pipeline on September 26th, they warned mariners of a gas leak in the Baltic sea. That evening, pressure also dropped in both lines of the Nord Stream 1 pipeline. NPR reported the next morning that seismologists suspected both pipeline leaks had been caused by explosions. Within days, authorities discovered a total of four gas leaks in both Nord Stream pipelines.

Russia built Nord Stream 1 in 2011 in order to supply Germany with liquefied natural gas (LNG) directly through the underwater pipeline, without having to rely on transit states like Ukraine or Poland. Construction on Nord Stream 2 began in 2018 but was not completed until September 2021, largely due to US sanctions and political pressure, and the finished pipeline was never certified. Both pipelines were inactive at the time of the explosions, but still contained some LNG.

Who would go through the effort of blowing up gas pipelines that had already been shut off, and to what end? One possible explanation can be inferred from the timing of the explosions: from September 23rd through the 27th, referendums on joining the Russian Federation were being held in the Donetsk and Lugansk People’s Republics (DPR and LPR) as well as the regions of Kherson and Zaporozhye. Pressure drops in Nord Stream 1 and 2 were detected on September 26th, while the referendums were still underway.

The DPR and LPR had voted for independence eight years ago and unsurprisingly 99.23% of voters in the DPR and 98.42% in the LPR voted “yes” this time around. Kherson and Zaporozhye voted 87.05% and 93.23%, respectively, in favor of splitting from Ukraine and joining the Russian Federation. The West has dismissed the referendums as a sham. The Nord Stream explosions might have been an act of retaliation from the US or its allies.

Others speculate that the US could have been responding to a protest in Germany earlier in the day calling for Nord Stream 2 to be opened. Sabotaging the pipelines would foreclose the possibility of Germany opening them under pressure from a domestic popular movement.

Of course, where it hasn’t succeeded in burying the story, the western mainstream media has maintained that the US had nothing to do with the Nord Stream explosions and has sought to pin the blame on Putin. Time magazine published an article headlined, “Russia Blows Up Gas Pipelines, Declaring an All-Out Energy War It May Already Have Lost”, in which it failed to adduce any logical arguments or evidence to support its bold claim. AP News accused Russia of pushing the “baseless conspiracy theory” that the US had been behind the explosions and proceeded to also blame “American conservatives and far-right groups” for sharing the supposed disinformation on social media. 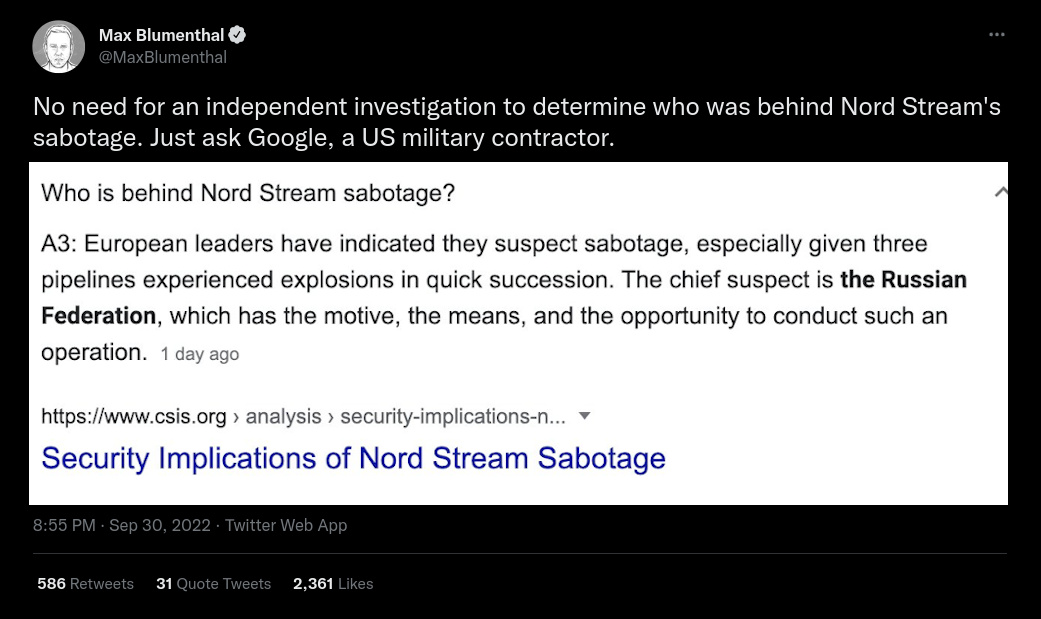 A senior US military official told Pentagon reporters that the US had been “absolutely not involved” in causing the Nord Stream pipeline leaks, while former CIA director John Brennan on CNN fingered Russia as the “most-likely suspect” for the explosions. NATO released an official statement on September 29th which declared that “[a]ny deliberate attack against Allies’ critical infrastructure would be met with a united and determined response.” The statement introduced a worrying new implication: if the US were to convince its allies that Russia had in fact blown up the Nord Stream pipelines, the conflict in Ukraine could escalate into an official war between NATO and Russia.

Multiple European governments have indicated they believe the explosions to be deliberate acts of sabotage. Fox Business reported that Ukraine directly accused Russia, claiming that the explosions had been a Russian “act of aggression towards the EU” with the aim to destabilize economies across Europe and cause panic before winter. Russia dismissed Ukraine’s accusations as “stupid and absurd,” pointing out that damage to the pipelines hurts Russia’s economic interests and deprives it of leverage over energy-starved Europe.

Indeed, leading up to the explosions, Russia had shut off both Nord Stream pipelines but maintained the ability to turn them back on at any time. With winter approaching, Europe would need LNG to keep warm. Once Europe could no longer tolerate the shortage, Russia could have convinced it at least to revoke sanctions on energy. Given that the infrastructure was already built and ready to bring in revenue, it would have been entirely absurd for Russia to destroy Nord Stream 1 and 2. Of course, the western mainstream media has provided no analysis beyond the usual mantra that “Vladimir Putin is a madman whose evil actions are completely unprovoked.” This refrain has served as the media’s canned explanation of Russia’s foreign and domestic policies for so long that the public has grown inured to its incoherence.

Ukraine is mistaken in blaming Russia, but its claims about the attack do contain a kernel of truth. The explosions are not an attack on the European Union as an institution; rather, they constitute an act of aggression against European countries and their people. Working-class Europeans, already suffering from the effects of sanctions on Russia, will see their living standards deteriorate further as winter approaches and energy prices continue to rise. As an institution of the ruling class, the EU clearly does not have average Europeans’ best interests in mind.

This summer, mere weeks before the Nord Stream attacks, the CIA warned the German government of potential attacks on gas pipelines in the Baltic sea. Germany’s failure to protect its pipeline is sure to have long term catastrophic effects on their economy. Without the infrastructure to receive LNG directly from Russia, Germany now has little choice but to import expensive LNG from the US. American firms stand to reap huge profits from this economic vassalization of Germany.

A statement from president Joe Biden in early February further implicates the US as the prime suspect behind the Nord Stream explosions. “If Russia invades, that means tanks or troops crossing the — the border of Ukraine again, then there will be — there will be no longer a Nord Stream 2,” Biden said during a joint press conference with German Chancellor Olaf Scholz. When asked by a reporter how the US would stop the pipeline, the president smirked and simply assured the reporter it would. Secretary of State Antony Blinken has boasted the US is “now the leading supplier of LNG to Europe” and heralded the destruction of the Nord Stream pipelines as “a tremendous opportunity to once and for all remove the dependence on Russian energy,” mere days after claiming to believe that no country stood to benefit from the attack.

At a recent meeting of the UN Security Council, Russia’s representative to the UN Vassily Nebenzia laid out why only the US gained from the pipelines going offline, perhaps for good. Nebenzia explained that while Russia had no interest in destroying its own expensive infrastructure project, constructed to export LNG and raise significant revenue, the EU has lost a major energy source going into winter. American suppliers of LNG, meanwhile, will see massive profits from any exports to Europe. While we will likely never get a proper investigation into the Nord Stream explosions, their impact is obvious: the ruling class in the US and EU will reap new superprofits at the expense of Europe’s working class.