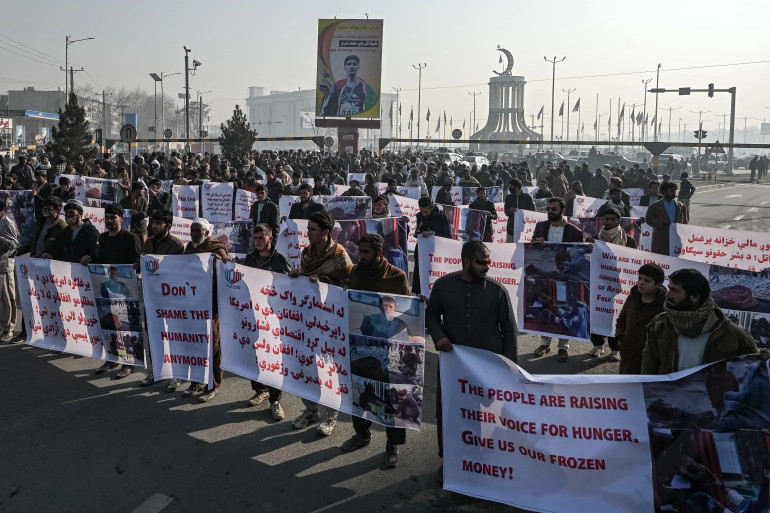 Image: People hold banners before marching on the street during the protest in Kabul [Mohd Rasfan/AFP]

When the United States military pulled out of Afghanistan last August, the US also stole billions of dollars of its central bank reserves. Over $9 billion of Afghanistan’s (DAB) assets were frozen across the world, $7B of the funds in the US Federal Reserve.

A year later in August 2022, US special representative for Afghanistan Thomas West told the Wall Street Journal that the US has no intention of returning the funds to the Afghanistan Central Bank, where the Taliban could access them. “We do not have confidence that that institution has the safeguards and monitoring in place to manage assets responsibly,” West explained. He pinned blame for the US decision on the Taliban’s alleged sheltering of an Al Qaeda leader, saying the case “reinforces deep concerns we have regarding diversion of funds to terrorist groups.”

On September 14th, the US Treasury and State Department released a joint statement announcing that the seized funds would be moved to the Switzerland Bank for International Settlements. There, disbursement of funds will be overseen by the “Board of Trustees of Afghanistan,” composed of “two highly qualified Afghan economic experts with relevant macroeconomic and monetary policy experience, a U.S. government representative, and a Swiss government representative.” The joint statement also makes the vague assertion that, “The Afghan Fund has the support of international partners committed to supporting sustainable monetary and macroeconomic stability in Afghanistan.”

President Biden said the $7B of Afghanistan’s foreign reserves held by the Federal Reserve should be used to compensate the families of victims of the 9/11 attacks, based on lawsuits that had found that Al Qaeda and the Taliban owed them billions in damages. However, a federal magistrate judge blocked release of the funds to these families on several grounds. As a foreign sovereign entity, Afghanistan’s central bank was “entitled to immunity from jurisdiction and its property is entitled to immunity from execution.” The US government had also declined to formally recognize the Taliban as the government of Afghanistan, and since under the constitution courts are not able to decide on which governments are official or not, this should have precluded the previous decision ruling the funds could be released.

Certainly some of the families of 9/11 victims sought the $3.5B in this lawsuit, with one family’s lawyer fully endorsing collective punishment of Afghanistan’s people for not stopping the Taliban: “they bear responsibility for the condition they’re in.” But others belonging to “September 11th Families for Peaceful Tomorrows” are demanding that all assets instead be returned to Afghanistan immediately, to prevent further harm to the Afghan people. As a spokesperson for the group recently told the Intercept, “There is not only a moral imperative in doing this, there is also a national security interest in doing this and preventing Afghanistan from sliding into total collapse.” In August 2022, a group of families sent a letter to Biden entitled, “9/11 Families Say: Afghan Central Bank Funds Belong to Afghans”. The letter explained that while some signatories did have lawsuits seeking damages, “no 9/11 family member joined these lawsuits to take money away from starving Afghans.”

They were not alone; in September 2021, the UN also urged the US to release the funds. Afghans marched on Kabul in December 2021 to demand the funds. That month, as the Organization of Islamic States (OIC) organized a fund to aid Afghanistan’s economy during this crisis, Pakistan’s foreign minister declared that despite the OIC’s help, “the economy can’t function and people can’t be helped without a banking system.” In April 2022, over 40 organizations including Muslim and Afghan interest groups, left-wing political parties, libertarian organizations, anti-war groups, human rights NGOs and think tanks addressed a letter to President Biden urging the release of Afghanistan’s funds and the end of what they call the “crisis of choice” in Afghanistan. 70 economists and experts wrote Janet Yellen in August 2022 with a similar request.

In February 2022, The Intercept released an interview with a foreign policy aide who criticized Biden’s continued freeze of Afghanistan’s assets, despite warnings of the harm this was causing its people:

A senior Democratic foreign policy aide, who was granted anonymity to openly share his thoughts on the Biden administration’s actions, said the policy “effectively amounts to mass murder.” According to the aid, Biden “has had warnings from the UN Secretary General, the International Rescue Committee, and the Red Cross, with a unanimous consensus that the liquidity of the central bank is of paramount importance, and no amount of aid can compensate for the destruction of Afghanistan’s financial system and the whole macro economy.”

In a hearing with the Senate Foreign Affairs subcommittee, representatives from the International Rescue Committee and the International Crisis Group warned that no amount of humanitarian aid could compensate for Afghanistan’s inability to use its central bank reserves and resume normal financial operations. Democratic Senate members in attendance justified the continued withholding of these funds by invoking the Taliban’s treatment of women and girls.

Miliband replied that the Taliban is making considerable concessions on gender equality and is currently allowing Afghan women — whose salaries remain unpaid amid the ongoing asset freeze — to work and attend school.

Miliband then presented what he described as the prevailing question among Afghan women in his organization: “How on earth does the West think they are helping our prospects when we can’t feed our families?”

The Taliban– accused by the US government and Western propaganda outlets of being driven only by greed, of mismanaging funds and exploiting the population– meanwhile has offered to barter with Russia to exchange Afghan trade products for gasoline and diesel so that Afghanistan’s economy can continue to function. The Taliban has also acceded to US demands for a “third party” to monitor its management of the DAB funds upon return.

The US continued to withhold the stolen assets, needed for basic stability and the survival of Afghans, even after an earthquake in June that left over 1,000 dead and 3,000 injured. The country’s situation continues to deteriorate. The most recent Afghanistan Situation Report by ReliefWeb found that:

18.9 million people – nearly half of the population – are estimated to be acutely food insecure between June and November 2022
4.7 million children, pregnant and lactating women at risk of acute malnutrition in 2022; 3.9 million children are acutely malnourished
All 34 provinces are facing crisis or emergency levels of acute food insecurity

The report emphasizes that while the economic situation for most Afghan families continues to decline, the most adversely affected are the most vulnerable: households with people with disabilities and those led by women. While the US has pledged humanitarian aid, the assistance is far less than the funds being withheld, and the strings attached prevent Afghanistan from building its own independent economy. Restrictions on economic activity in Afghanistan also stem from renewed US economic sanctions on the Taliban, deterring companies that would otherwise want to do business with Afghanistan for fear of running afoul of sanctions.

The United States does not hesitate to use economic warfare in cruel and murderous ways against countries that resist US hegemony. This has been demonstrated by its 60-year bipartisan blockade of Cuba, even during the COVID-19 pandemic, when it prevented the import of syringes and other medical supplies for the Cuban population. This came while Cuba’s economy was forced to adjust with the loss of tourism due to COVID. Over a quarter of the world’s population lives under illegal, unilateral coercive measures imposed by the US, referred to as “sanctions.”

For the US, it is not enough simply to have veto power in international organizations with tremendous power over countries in need of aid such as the UN, the IMF and the World Bank. Washington also demands the right to weigh in on how an independent state should govern itself and use its central bank money. Biden seems to have appointed himself the conservator of Afghanistan. One is reminded of the media blitz over pop singer Britney Spears’ conservatorship, when documentaries, hashtags, and protests demanded that the singer be allowed to manage her own money rather than have her father maintain his legal authority over it, which they said he had used to restrict her freedom. If only the same level of rapt media attention were focused on Afghanistan’s fight for its financial independence, stolen by the US!

As the crisis in Afghanistan drags on, neither Biden nor Congress have taken any steps to stop their collective punishment of the people of Afghanistan. They have ignored many warnings, and cannot now claim ignorance of the situation or feign concern for the human rights of women and girls living under the Taliban. This theft can only be viewed as a deliberate act of terror and economic war upon the people of Afghanistan, who deserve nothing less than swift justice and immediate, full compensation.

Arsenal of Hypocrisy: Why Wasting Ammo is the Whole Point

Nancy and the Neocons

Conflict in Ukraine: Clashes in the East