The Schiller Institute hosted the conference on October 15, in NYC.

In Manhattan on Saturday, October 15th, 125 mostly young people attended Schiller Institute’s youth conference, titled “Build the New Paradigm: Defeat Green Fascism.” Presenters included Schiller Institute and LaRouche movement members, journalists, and media figures from around the world. The shared message was overall one of hope for the future and optimism about the possibility of building a mass movement to steer our society away from nuclear war and “degrowth” toward a more prosperous, peaceful future.

“World Citizens of all countries, unite”

The keynote speaker of the morning panel was Helga Zepp-LaRouche, founder of the International Schiller Institute, presenting virtually from Germany. She advised of the growing danger of nuclear war, which the US and NATO have inflamed by crossing Russia’s red lines and threatening to balkanize the federation. Invoking a prediction from her late husband Lyndon LaRouche, Zepp-LaRouche warned that if a new economic world order is not soon developed, the planet would escalate to new crises of economic depression, fascism, and a third world war. Her speech framed the rest of the day’s conference, juxtaposing Xi Jinping’s vision of a “shared community of the future of mankind” with Frederich Schiller’s concept of a “world citizen” and closing with a variation on the famous call from the Communist Manifesto:  “World citizens of all countries, unite — to stop World War III and create a better world.”

Jackson Hinkle spoke next on the “green fascism” driving the “Great Reset” agenda. He emphasized the moral imperative we have to increase energy production worldwide and provide universal access to basic essentials. Instead, energy crises are being self-inflicted such as the present in Europe resulting from the all-out economic war against Russia. Other neoliberal policies are laundered as “green” but merely increase people’s economic desperation. Burdened with debt, an energy crisis, and inflation, the average person has limited means or time to oppose such policies or even understand them when the media is controlled by those who benefit most from them.

“Why are developing and underdeveloped countries the only ones expected to risk their energy securities?”

Another speaker, Princy Mthombeni, founder of Africa4Nuclear, gave her perspective as a South African on on so-called “green” policies. African nations will be unable to assert their sovereignty or provide for their people if forced to comply with the G7’s Net Zero proposal. “Why are developing and underdeveloped countries the only ones expected to risk their energy securities?” she asked. She wondered why the US and other G7 countries, which have rejected these same proposals for themselves, would expect South Africans to step up as guinea pigs for their renewable goals. Indeed, as these countries pledged $8.5B to transition South Africa to green energy (with no pledge to increase nuclear power), Western-owned energy companies there continue to export coal to Germany. She emphasized that Africans need energy to industrialize, and the energy generated using only renewable forms is simply insufficient for the task at hand.

Rahma Nantongo, a contributor from Uganda, shared that the EU and environmentalists have been pushing to prevent completion of the East African Crude Oil Pipeline (EACOP). This pipeline would radically improve quality of life for many in Uganda, enabling many more households to cook with gas or electricity rather than fire or charcoal. Nantongo started the #Youth4EACOP hashtag on Twitter to show the strong support among Ugandans and Tanzanians for this new energy source. She is not opposed to clean energy, but added that Ugandans will need access to many diverse sources of energy to best improve living conditions in their country.

“If you want to get rich, you need to fix the road first.”

Continuing the theme of African infrastructure, Shexiu Huang of Guangdong University spoke on African/Chinese partnership for infrastructure development through the framing of addressing three issues holding back African industrialization: shortage of infrastructure, shortage of skilled labor, and shortage of capital. Both Huang and Mthombeni referenced the African Union’s Agenda 2063, a concrete plan to create an “an integrated, prosperous and peaceful Africa, driven by its own citizens, representing a dynamic force in the international arena.” This agenda’s stated goals include increased standards of living, infrastructure and modernization; increased education and civil institutions, and a united, decolonized, Pan African cultural renaissance. These are strikingly complementary to the Schiller Institute’s vision for the world as expressed through this conference: the ability for every person alive to develop to their full potential without being held back by poverty or underdevelopment; the development of new classical cultures that increase a sense of beauty and discovery; and global institutions that support peace, development, and sovereignty rather than war, imperialism, and colonization.

The gravity of our current geopolitical crises were not forgotten throughout the day, but the focus was on how those who understand our challenges can step up to address them. Jason Ross, executive director of the LaRouche Organization, and LaRouche Youth Movement members spoke on how their values address this challenges. Ross emphasized the need to develop a “joy of discovery” in young people. Children should be praised not for having the ‘correct’ views but rather to develop their own, through a process of discovery. Chicago Public Schools music teacher Dana Anex argued in her presentation that one great way to foster this mindset in students is through training in classical music. Children who grow up surrounded by poverty and violence often reach to the conclusion that “prosperity, safety, and beauty are not for them.” But Anex testified that she has seen her students develop increased self-discipline, curiosity, and problem-solving abilities with just less than a year of a music education focused on classical structure and fostering creativity.

The final speaker was LaRouche Youth Movement member Ashley Tran, who called on the US to end the Federal Reserve, replacing it with a Hamiltonian national bank; abolish federal agencies; leave NATO & G7 in order to strengthen international cooperative relationships; and ultimately, to join the Belt and Road initiative.

“The power of the human spirit to transcend death”

The second panel focused on the origins of green ideology as well as how to overcome it. The afternoon was opened by keynote speaker and senate candidate Diane Sare, who linked the dark forces behind the 1950 Congress for Cultural Freedom to today’s mass indoctrination of people to adopt a pessimistic, dissociated view of self and humanity. Sare contended this deception has enabled the US government to lead the world to the brink of nuclear war, perhaps over it, while its citizens remain largely complacent or resigned to the emergency. However, an understanding of “the power of the human spirit to transcend death” as was expressed through African American spirituals, can penetrate this catatonia–arousing people to action, leadership, and radical change.

Sare was followed by Haz Al-Din, Marxist-Leninist influencer from the Infrared Collective, who expressed similar optimism in the human spirit. Al-Din described humanity’s choice as between whether to march onward, making discoveries and expanding the human species, or to sacrifice the potential of our species in the name of preserving the “universal subject” of our humanity. Risking extinction to pursue the highest limits of human possibility would, for Al-Din, be more dignified than limiting growth and industry, sacrificing pursuit of meaning and our very humanity in the process.

Schiller President USA Megan Dobrodt, commentator Fox Green and journalist Sameera Khan all spoke to the ways in which fascism and its eugenicist agenda were not defeated but only rebranded in the guise of putatively progressive, environmentalist politics. When AOC talks about the need to “decarbonize,” Khan said, she is talking down to China. Unsurprisingly, green energy policy has become another cudgel used to bash those countries resisting US hegemony and the so-called “rules based,” unipolar world order. 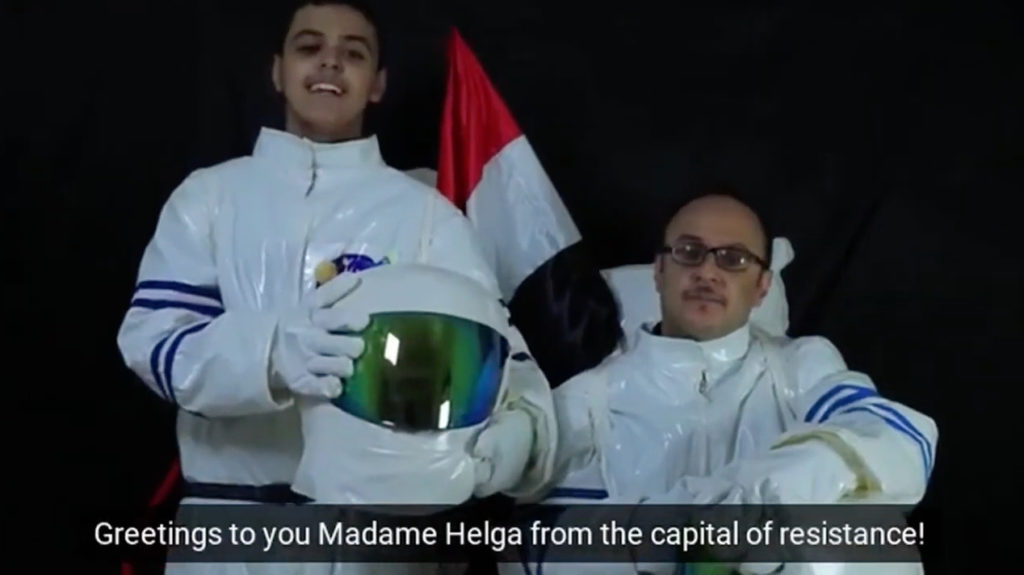 The optimism for the human spirit to defeat green fascism and US hegemony was beautifully conveyed in a video message to the conference by Fouad Al-Ghaffari, a supporter of the Schiller Institute based in Yemen. His video featured a child, presumably Al-Ghaffari’s son, and was addressed to Helga Zepp-LaRouche as well as the youth across the world who have joined the movement. The message praised the BRICS bloc and the Belt and Road initiative as projects that “aim to end the animalistic liberal ideology.” Despite being subjected to a brutal genocidal war and blockade facilitated by the United States, Al-Ghaffari and his son managed to dress in makeshift astronaut uniforms. With beaming smiles, they expressed their devotion to “playing a creative role in humanity’s future and civilizational development,” on earth and in outer space.

The audience showed great appreciation for Jose Vega and Kynan Thistlethwaite, two LaRouche Youth Movement members who recently made national headlines after confronting AOC about her role in leading the US to the bring of nuclear war with Russia. Vega spoke about the imperative to act now, out of love, to change course away from nuclear war and toward a better future.

While LaRouche the man was smeared as everything from a cult leader to a fascist, and these accusations follow those who continue to spread his ideas, this conference armed participants with powerful ideas about how citizens across the world can better collaborate on mutually-beneficial infrastructure projects, and invigorated by the passion and positivity of the Youth Movement members. The Schiller Institute’s vision for infrastructure and creative development across the world is an antidote to fascism. It is a project dedicated to human innovation, creativity, and collaboration beyond the wildest dreams of those blinded by a reactionary “degrowth” mindset.

The Narrative Matrix Hides The Truth About The World, And About Ourselves

Capitalism Has Failed As Badly As Anything Can Fail: Notes From The Edge Of The Narrative Matrix